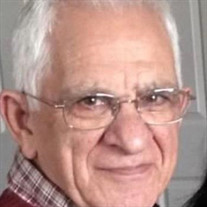 Anniello J. Nappi (Niel), 89 of Whiting, N.J. passed away peacefully on Friday, March 4th with his loved ones by his side. Niel was the youngest of 10 born to Anniello and Julia Nappi who emigrated from Italy. He is predeceased by his parents and all of his siblings: John Nappi, Jerry Nappi, Tony Nappi, Mike Nappi, Margaret Medolla, Immaculate (Mac) Ziegler, and 3 other siblings who passed shortly after childbirth years before Niel was born. Born and raised in Keyport, Niel attended and graduated from Keyport High School. He worked as a machinist after graduating and was then called to serve our country in the Army during the Korean War. Niel held the rank of Sargent and was awarded a bronze star for his meritorious service. A patriotic and proud American, Niel always had the American flag displayed outside his home. After Niel was discharged he met his wife Lois at a local dance. They dated for a couple of years and were married in 1959. Niel built their first home in Keyport along with his brothers and father. He was always very handy. He could build and fix anything and continued to do home improvements over the years for his own home and for each of his children. Niel and Lois moved to Middletown in 1968, raised their 3 children and remained there until retirement in 2000 before moving to Whiting. Niel was a machinist by trade but also did painting and wall papering for many years as a side job with a good friend and neighbor from Middletown. Even in retirement Niel continued to work, driving for Dial a Ride in their senior community and delivering prescriptions for CVS for 18 years, completely retiring just 4 years ago. He had many stories from his CVS deliveries about how he would help people in need. Elderly women would ask him to change a light bulb, take out the garbage or sometimes balance a checkbook. Whatever it was, Niel would lend a hand with no questions asked. Niel was a quiet man, never liked a fuss, but as quiet as he was he could surprise you with his quick wit. Most importantly, he was a kind, sweet, and good man who was always helping someone. Niel’s hobbies when he was younger were playing cards with his best friends, bowling and of course working around the house and yard, he was meticulous with landscaping and took great pride with how his home was kept. He was a lifelong Yankees and Giants fan and attended many games with friends and his children. One of his favorite memories was going the Superbowl in Pasadena, California in 1987 to see the Giants beat the Broncos. Later in retirement he enjoyed more simple things like his crossword puzzles and Sudokus and he loved to sit out in the garage in the nice weather with his beloved dog Bella on his lap to watch the neighborhood go by, everyone knew him and would stop to wave or chat. Niel is survived by his wife of 63 years, Lois, his daughters Barbara Jean Nappi and MaryAnn Nappi, his son Niel Robert Nappi and grandchildren Niel Robert Nappi, Jr. and Alicia Marie Nappi - many nieces and nephews and other extended family members. He was dearly loved and very close with his children, grandchildren and nieces and nephews. He was someone all admired, respected and he will be missed more than words could even describe. If you would like to pay your respects, you may join the family at a memorial mass which will be held at All Saints Chapel, (directly behind St. Elizabeth Ann Seton Roman Catholic Church), 30 Schoolhouse Rd., Manchester, N.J. 08759 on Thursday, March 10, 2022 at 10:45am. A repast will follow at Italy’s Best, 652 NJ-70, Lakehurst, N.J. 08733 at approximately 12 noon. In lieu of flowers donations can be made to Wounded Warriors Foundation.

Anniello J. Nappi (Niel), 89 of Whiting, N.J. passed away peacefully on Friday, March 4th with his loved ones by his side. Niel was the youngest of 10 born to Anniello and Julia Nappi who emigrated from Italy. He is predeceased by his parents... View Obituary & Service Information

The family of Anniello Nappi created this Life Tributes page to make it easy to share your memories.