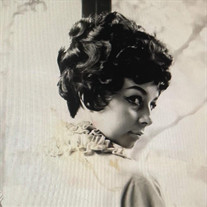 Awilda &#8220;Lily&#8221; Ayala Awilda Ayala 79, of Whiting NJ passed away at Shorrock Gardens on February 8th, 2022. Born in Mayaguez, Puerto Rico, she lived in Rutherford NJ before moving to Manchester Township in 2003. For over 60 years Lily... View Obituary & Service Information

The family of Awilda "Lily" Ayala created this Life Tributes page to make it easy to share your memories.

Send flowers to the Ayala family.