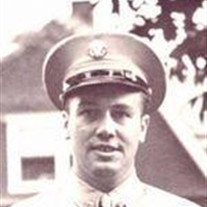 CHARLES T. HUFSMITH, 89, of Cedar Glen Lakes, Whiting, MANCHESTER, died Thursday, November 8, at Manchester Manor Rehabilitation Center. He was an Accountant for Turner Construction, New York City, NY for 20 years, retiring in 1983. He was a US Army veteran of World War II, serving in Africa and Italy. He was a communicant of St. Elizabeth Ann Seton Church, Whiting. He was a member of the VFW, Post 8745, Whiting. He was on the Board of Directors of Cedar Glen Lakes for 6 years and was very active in numerous clubs. Born in Orange, he lived in Clark before moving to Whiting in 1984. He was predeceased by his sister, Helen Menzel, in 2005. He is survived by his wife of 60 years, Adele; two daughters and sons-in-law, Ruth and Charles Larsson of East Windsor and Susan and Tim Kelley of Virginia; one son, Stephen Hufsmith of Massachusetts, three grandchildren, Denise, Christy and Matthew and one great-grandson, Sean. A Memorial Mass will be offered at 11 a.m., Saturday, November 17, in the All Saints Chapel of St. Elizabeth Ann Seton Church, 30 Schoolhouse Road, Whiting. Arrangements are under the direction of Manchester Memorial Funeral Home, Whiting. Donations in his memory may be made to the American Cancer Society, 1035 Hooper Avenue, Toms River, NJ 08753.

The family of Charles Hufsmith created this Life Tributes page to make it easy to share your memories.

Send flowers to the Hufsmith family.