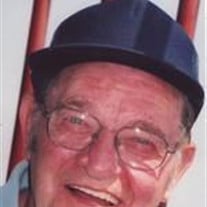 Eugene J. Graybush, 81, of Whiting, passed away Tuesday, December 15, 2009 at home. Born in Hillside, he lived in Jackson before moving to Whiting in 2005. Mr. Graybush owned and operated Gene's Auto Body Shop in Morristown, NJ, retiring in 1992. He obtained his airplane pilot license, built and flew radio control model airplanes, enjoyed fishing and the beach, a US Army Veteran of The Korean War. He was a volunteer of the Irvington Police Dept; former Chief of the Shongum Fire Co. and Communicant of St. Elizabeth Ann Seton Church, Whiting. Predeceased by his first wife, Dorothy and his second wife Joan, daughter Ann, two brothers John and Conrad, he is survived by his wife Margaret, seven children, two stepdaughters, three brothers, three sisters, twelve grandchildren, four great-grandchildren, and one step-grandson. Visitation will be held on Sunday December 20, 2009 from 2 to 4 pm and 6 to 8 pm and on Monday from 10 to 10:45 am at Manchester Memorial Funeral Home, 28 Schoolhouse Rd, Whiting, NJ. A funeral liturgy will follow at 11 am Monday at All Saints Chapel of St. Elizabeth Ann Seton Church. Interment will at Brig. Gen. William C. Doyle Veterans Memorial Cemetery, Arneytown. Memorial Contributions to the American Cancer Association would be appreciated.

The family of Eugene Graybush created this Life Tributes page to make it easy to share your memories.

Send flowers to the Graybush family.