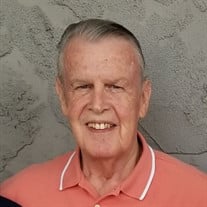 John “Jack” Murray, 82, of Whiting, NJ, passed away on Tuesday, April 27, 2021, surrounded by those he loved and the sound of Irish music. He was born and raised in Jersey City, NJ. Although he lived in North Arlington for 30 years and Whiting for the past 15, he always considered himself a Jersey City boy at heart. After graduating from Snyder High School, he enlisted in the United States Marine Corps. His time in the Marines helped shape his future and was the beginning of a lifetime dedicated to service. He was a detective for Hudson County for 30 years and after retirement served as a Court Security Officer for the US Marshall’s Office for 12 years. He is survived by the love of his life, Mary (nee McEachern); his daughters Kristine and her husband Eric Plent, and Denise and her husband Robert Molter; his grandchildren Kate, Nicole, Aidan, Shawn, and Matthew; and his sisters, Maureen Stawicki and Patricia Palumbo. He was preceded in death by his parents, Mary (nee Shaughnessy) and Joseph Murray and his two brothers, Joseph and William. Jack had a larger than life personality that could fill any room. He could bring fun and humor to almost any situation. He was extremely proud of his Irish heritage and his time with the Marines, but his biggest source of pride was his family and friends. Jack considered himself “a very lucky man”. He adored his wife and girls more than anything else in the world. His love for them was boundless, and he made sure everyone knew it. He was an amazing Pop Pop, the perfect mix of silly and loving. He enjoyed spoiling his grandchildren and would spend countlesshours at the claw machine trying to win them prizes during their annual trips to Wildwood. Jack cherished his lifelong friendships with the brothers of his heart, his old gang from Jersey City, the Super Bowl crew. Jack was generous to a fault, the type to give a person the shirt off his back. He religiously played the lottery and bought scratch offs in hopes of hitting it big for his family. He knew how to lift others up with a heartfelt compliment, a (somewhat embellished) story, or a (possibly inappropriate) joke. Jack was a very special person, a true one-in-a-million. The love and impact he had will live on in the hearts and memories of those who loved him. Semper Fi, Jack! The family will receive friends and family at Manchester Memorial Funeral Home, 28 Schoolhouse Road, Whiting, on Tuesday, May 4th from 9:00-10:30 a.m. Services to follow at 10:45 a.m. at the Chapel at St. Elizabeth Seton Church in Whiting. In lieu of flowers, donations to St. Jude Children's Research Hospital may be made in memory of Jack. stjude.org

The family of John J "Jack" Murray created this Life Tributes page to make it easy to share your memories.