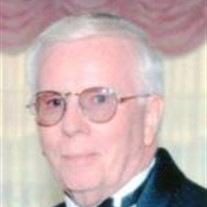 John Francis Mulling was called home by our Heavenly Father on Saturday, June 26, 2010. John was born in New York in 1927 and was raised in Jersey City, New Jersey. He and his wife settled in Newark, NJ where they raised their six daughters and later in Hopatcong, NJ. John worked for over 40 years at Western Electric in Kearney as an Accounting Analyst and retired to Whiting, NJ in 1985. He moved to Toms River, NJ in 2006 and recently to Bridgewater, NJ. John served in the Air Force during World War II as a Private First Class, Clerk General stationed in Newfoundland. He was very active in the Church and served as a Leader of Song and Choir member in all of the congregations that he was a member of as well as chairing many church activities. He was also a member of social organizations including AT&T Pioneers Club, W.E.R.A. and the Whiting Italian Club. Devoted to his wife and "girls", John will be remembered for his love of music, devotion to the Church, and the kindness he showed others. John is survived by his wife of 62 years Caroline (La Marca) Mulling and his "girls" - Laura Smith (Naperville, IL), Deborah Reynolds (Las Vegas, NV), Carol Stephans (Southport, NC), Claudia Manno (Sandyston, NJ), Lysa Martinelli (Branchburg, NJ), and Melanie Schueller (Aberdeen, NJ). He is also survived by his Sons-In-Law - Brian Smith, Tom Reynolds, Bob Stephans, Phil Manno, Joe Martinelli, Andrew Schueller, his Grandchildren - Chad Reynolds (Jodi), Ian Reynolds (Hilliary), Kyle Smith, David Stephans (Melissa), Rick Walicki (Amber), Shane Smith, Joseph Martinelli, Olivia Schueller, Alex Schueller, and his Great-Grandchildren - Jenna Reynolds, Megan Reynolds, Cameron Reynolds, Junior Reynolds, Eric Reynolds, Evan Reynolds. His sister Ruth LaRoche (Barnegat, NJ) also survives him. John is pre-deceased by his parents - Alfred Mulling & Mary (Burke) Mulling, his brother Alfred Mulling and his sister Veronica Michaelkowski. A funeral service will be held at 10:30 a.m. on Tuesday, July 6 at St. Bernard of Clairvaux Church, 500 Route 22, Bridgewater, NJ. Visitation will be one hour prior to the service at the church. Interment will be at 12:30 p.m. at St. Gertrude's Cemetery, 53 Inman Avenue, Colonia, NJ. In place of flowers, donations in his memory may be made to the Alzheimer's Association, 225 N. Michigan Ave., Fl. 17, Chicago, IL 60601 or St. Jude Children's Research Hospital, 501 St. Jude Place Memphis, TN 38105. We would like to thank everyone for their support, care, love, and prayers. For information go to manchestermemorial.net

John Francis Mulling was called home by our Heavenly Father on Saturday, June 26, 2010. John was born in New York in 1927 and was raised in Jersey City, New Jersey. He and his wife settled in Newark, NJ where they raised their six daughters... View Obituary & Service Information

The family of John Mulling created this Life Tributes page to make it easy to share your memories.

John Francis Mulling was called home by our Heavenly Father on...

Send flowers to the Mulling family.