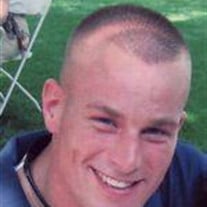 JOSEPH GEORGE PUSHKAL, 31, Glen Burnie, MD, formerly of Whiting, MANCHESTER, passed away Sunday, April 6, at home. Born in Freehold, NJ, he lived in Whiting and Hagerstown, MD before moving to Glen Burnie eight months ago. Joseph was a Federal Police Officer for the National Security Agency/Central Security Service at Fort Meade, Maryland for two years. He also served in the US Army for seven years, two months including a tour of duty in Kosovo and two tours of duty in Iraq. He was a communicant of St. Elizabeth Ann Seton Church, Whiting. Surviving are his son, Tyler Joseph of Hagerstown, MD; his parents, Ray and Mary Ann Pushkal of Whiting; two brothers, Ryan Pushkal and his wife, Heather of Forked River and Michael Pushkal of Alexandria, VA; his grandfather, George Pushkal of Freehold; his fiancée, Kellie Evans of Glen Burnie, MD and his former wife, Sara of Hagerstown, MD. Relatives and friends may call Thursday from 2 to 4 p.m. and 7 to 9 p.m. and Friday morning from 10 to 10:45 a.m. at the Manchester Memorial Funeral Home, 28 Schoolhouse Road, Whiting. A funeral liturgy will follow at 11 a.m. at St. Elizabeth Ann Seton Church, Whiting. Interment will be at Brig. Gen. William C. Doyle Veterans Memorial Cemetery, Arneytown. In lieu of flowers, donations in his memory may be made to Big Brothers & Big Sisters of America, 230 North 13th Street, Philadelphia, PA, 19107. For directions and further information, go to www.manchestermemorial.net.

The family of Joseph Pushkal created this Life Tributes page to make it easy to share your memories.

Send flowers to the Pushkal family.