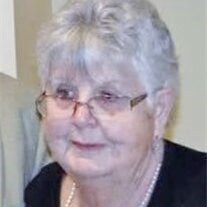 Margaret Dolores (nee Farley) Zur Heide, 90, passed away peacefully on August 29, 2021 at the home of her daughter and son-in-law, Mary Ellen and Martin Craig, in New Castle, Delaware. Margaret, who was known as “Peggy” to her friends and family was born on March 26, 1931 in the City of New York and was raised in Staten Island. Peggy moved to New Jersey after her marriage to George Zur Heide and spent most of her adult life in Secaucus, NJ where she and George raised their three daughters. Peggy and George moved to Whiting in 2003. Peggy had a good life and was grateful for all her friends and family with whom she spent many good times. She was a person who people could depend upon and was happy to help anyone who needed her. Peggy was a devout Catholic with a special devotion to the Blessed Mother Mary who she honored every day of her life by saying the Rosary. George supported Peggy in her devotion and was beside her all the way. One of the most devastating times was when her grandson, Matthew, died after a kidney transplant. She never stopped praying for him. She knew Matthew would be with her beloved husband, George, to greet her when she entered those gates of Heaven. George died on June 19th of this year. Peggy had never been without him since she was 18 years old and he was 19 years old. Through good times and bad, richer or poorer, sickness and in health, they held true to each other for 72 years. “Till death do us Part” was not an option for her. She wanted to go be with him. She died in her sleep – just the way she wanted it – drifted off to Heaven to be greeted by her husband George, her grandson Matthew, her sister Lorraine as well as many more who she missed so very much. Peggy was predeceased by her husband, George, her parents Charlotte Grove and James Farley, her sister Lorraine Gale and her grandson Matthew Henkel. She is survived by her devoted children Kathryn and her husband James Morbit, Mary Ellen and husband Martin Craig, Helene and husband Henry Henkel; her dear sister, Marilyn Yeagley; cherished grandchildren Tara and husband Walter Cross, George and wife Cheryl Sirois, John Henkel, Katherine Henkel, and Katie Lynn Craig; great grandchildren Anne-Marie and Jordan Cross, Annabelle Henkel, Scarlett Sirois, and Matthew Feehly and her many loving cousins, nieces and nephews. Arrangements are being handled by the Manchester Memorial Funeral Home, 28 Schoolhouse Road, Whiting NJ. Visitation will be Friday, September 3rd from 2-4pm and 7-9pm. A Funeral Mass will be held on Saturday, September 4th at 9 am at Saint Elizabeth Ann Seton Church, All Saints Chapel, 30 Schoolhouse Road Whiting, NJ. The family asks that in lieu of flowers, donations be made to the Secaucus Fire Department – Engine Company #1, 150 Plaza Center, Secaucus, NJ 07094 or to a charity of your choice.

Margaret Dolores (nee Farley) Zur Heide, 90, passed away peacefully on August 29, 2021 at the home of her daughter and son-in-law, Mary Ellen and Martin Craig, in New Castle, Delaware. Margaret, who was known as &#8220;Peggy&#8221; to her friends... View Obituary & Service Information

The family of Margaret "Peggy" Zur Heide created this Life Tributes page to make it easy to share your memories.