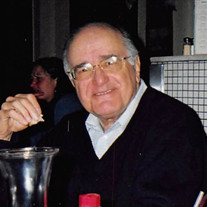 Robert E. Sievers, 84, of Whiting, passed away Thursday, April 29, 2021 at home surrounded by family. Born in Jersey City, NJ, he moved to his “beloved” Coronado, CA, where he lived for 38 years. Robert was a Technical Manual Editor at US Naval Air Station North Island. He was a communicant of Sacred Heart Church, Coronado and a member of the church’s Knights of Columbus Council 5216. Upon retiring, Robert moved back home to NJ, moving to Whiting in 2002. He became a communicant of St. Elizabeth Ann Seton Church and was a Eucharistic Minister and a member of the church’s Secular Franciscans. Robert was a US Army veteran, a voracious reader, painted watercolors and was a master of crossword puzzles and Jeopardy. Robert was predeceased by his parents, Julian and Josephine (Albro) Sievers, his brother and sister-in-law, Julian and Carmella Sievers, his brother, Harry F. Sievers and his sister and brother-in-law, Joan and John Catalano. Robert is survived by his nieces and nephews: Stacey and Mike Rossi of Bayville, Harry Sievers and Lisa Baker of Aberdeen, Scott and Sherry Sievers of Bridgeton, Eric Sievers of Old Bridge, Valerie Sievers of Roanoke VA, Julian Sievers of Bridgeton, Florence and Pat Attanasio of Oak Ridge, Diane and Jim Maglione of Ridgefield Park and John and Lillian Catalano of Ridgefield Park; Sister-in-law, Gloria Sievers of Old Bridge; and many friends on both coasts, everywhere in between and even “across the pond” in the UK. Visitation will be Tuesday, May 4th from 3 to 7 p.m. at Manchester Memorial Funeral Home, 28 Schoolhouse Road, Whiting, NJ. A Mass of Christian Burial will be offered at 10:45 a.m. on Wednesday, May 5th at the All Saints Chapel of St. Elizabeth Ann Seton Church, Whiting.

The family of Robert E. Sievers created this Life Tributes page to make it easy to share your memories.

Send flowers to the Sievers family.