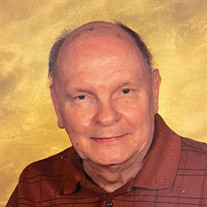 Warren William “Buddy” Bruen, 89, of Leisure Village West, Manchester, NJ, passed away on Wednesday, April 13, 2022 at Hampton Ridge Care Center in Toms River. Born in Newark, He lived in Lyndhurst for 31 years until moving to Manchester 23 years ago. A US Army veteran of the Korean War, Mr. Bruen was a toll collector for the Garden State Parkway for 27 years until retiring in 1991. A former member of the American Legion, Buddy loved to read, listen to music, play cards, watch old movies and his favorite team, the NY Yankees, spending special times with his family, and enjoying his retirement years at the Jersey Shore. Predeceased by his parents, Warren and Anna (Gaul) Bruen, his brothers Harold and Herbert Bruen, and his grandson Christopher Butler; he is survived by his loving wife of 68 years June (Gottas); his daughters, Charlotte Reid and her husband Russ and Catherine Ochse and her husband Scott; his grandchildren, Kimberly Cronce and her husband Jason, Michael Ochse and his wife Kerri, and Thomas Ochse and his wife Stephanie; his great-grandchildren, Haleigh, Madison and Kendall Cronce; his grand-cat, Phantom; and many dear and loving friends. Visitation will be Wednesday, April 20, 2022 from 12noon to 1pm at the Manchester Memorial Funeral Home, 28 Schoolhouse Road, Whiting, followed by a funeral service at 1:00pm and burial at Whiting Memorial Park, Whiting.

The family of Warren William “Buddy” Bruen created this Life Tributes page to make it easy to share your memories.

Send flowers to the Bruen family.